Slim Spurling: a scientist and researcher with heart and soul 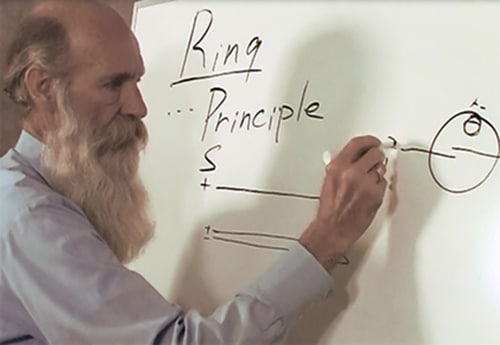 Slim Spurling was born in 1938 in Aberdeen, South Dakota. In 1944 he moved with his parents to Colorado. As a child, he loved the land and the forest, fishing, and hunting, and working in the fields. His family also lived in harmony with nature. After two years as a naval officer, he completed a bachelor’s degree in natural sciences at Colorado State University, majoring in forestry, botany with mycology (the study of mushrooms), and chemistry.

Because of his excellent research, he was offered a scholarship for a three-year master’s degree to develop a special chemical substance. After reading the criteria this substance should meet, it was clear to him that the research was intended to manipulate the population. Deeply shaken and disgusted, he refused to take his diploma and turned his back on the scientific and academic community for a long time.

After leaving academia, Slim devoted himself to blacksmithing for the next 20 years. He founded and directed the largest blacksmithing school in the USA in the 1970s. As he once said, “It was an ingenious experience in alchemy, which is nothing but an early form of working with the four elements: earth, air, fire, and water.” All of the beautiful pieces of iron made by him have a very personal and inimitable signature. This craft always remained of the greatest importance to him in everything he later did.

Years later he and his good friend Bill Reid began to explore the intricacies of alchemy and metaphysics. He had first encountered dowsing as a young boy. His parents hired a dowser to find a suitable spot for a well. The dowser made Slim hold one end of the rod and Slim felt it move as they hit the water. Many years later he remembered it and learned to dowse. He and his partner Bill Reid used this knowledge to find geopathic interference fields. Slim found a simple way to eliminate interference. He traveled the world to locate and block water veins and other geopathic interference fields and the Hartmann grid with the help of dowsing rods.

Teaching this method and using the Light-Life Tools was one of the foundations of his workshops and continues to be taught by his wife, Katharina Spurling-Kaffl, and Scott Anderson, a student of Slim.

The discovery of the Light-Life Tools

Reading the collected works of Wilhelm Reich – especially the “Cloud Buster” he invented – gave Slim an idea. In the 90s, air pollution was a hot topic and the famous “Brown Cloud” over Denver was in all the headlines. Slim built his own “Cloud Buster”. The experiments with this device provided him with the first data for his Environmental Harmonizer that he was to create. In later years there were also series of tests with the so-called “Caduceus Coil”, a special coil that emits an energy beam. In the endeavor to obtain a light-energy beam with a larger area, the first Light-Life Ring was created.

With the Harmonizer technology, which he developed a few years after the ring was discovered, it became possible to significantly change the ecological status of large areas, eliminate air pollution, and strengthen the growth of plants. A profound experience for Slim in this context was the “Denver Experiment”, in which, with the help of several Harmonizers deployed at strategically important locations, it was possible to dissolve the “brown cloud” over Denver.

Slim came an important step closer to his goal of contributing to the elimination of air pollution and the restoration of health and harmony on our planet.

The Light-Life Tools are conquering the World

Over the years, other Tools were created, which applications Slim taught in addition to his dowsing technique in all his workshops. They assist people to clean the environment and improve their quality of life. It does not matter whether it is a physical, emotional, emotional, or spiritual concern.

When Slim gave his first workshop in Munich in 1997, he met Katharina Kaffl and fell in love with her. In 2001 they were married. To Slim’s intuitive nature, Katharina brought her professional experience in business, finances, and practice as a healer. Before long, she also became a collaborator in his creative world of IX-EL International GmbH. During their time together, they created many new Light-Life Tools and several new product lines.

After Slim left this world in 2007, Katharina continued their work together with her team. They are dedicated to gradually spreading more harmony and life energy around the world with each tool.

You can find out more about the individual Light-Life Tools and their benefits for personal harmony in our newsletters. Would you like to know which three tools Slim never left his house without? Check out Slim Spurling’s Tool Kit.